Solar power at the dispensary

In Tanzania, the rural areas are frequently not connected to the energy network.

The medical staff at Marumba village dispensary was still using kerosene lamps and torches to help patients who come to seek services at night – frequently pregnant mothers in labour.

The installation of solar power was the only possible solution to avoid any medical risk and help the staff in upgrading their performance.

This project has been realized in December 2015.

eu can aid! and TDT financed with 5,000 € the installation of 10 SOLAR panels in the dispensary. eu can aid! contribution was supported by the generous donation of Solar Solidarity International asbl.

All welcomed very much the joint program and strengthened especially the rapid and comprehensive implementation of the solar project at the dispensary and the staff house. It has brought light into a village without electricity and improved very much the working and living conditions of the medical staff, which was about to leave the village because of the remoteness of the area and the bad conditions,said Linus Buriani, local project officer

Construction of a classroom in the primary school 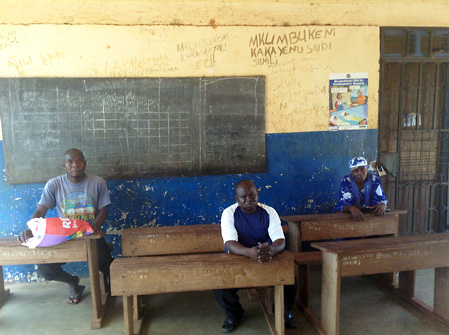 At Marumba, there are presently only four classrooms. The pupils of one class used to learn sitting under the trees, with the direct consequence of an important lack of children’s motivation in attending courses and – on medium term – to see the number of villagers who cannot read and write increasing.

The amount of 7,350 €, which includes cement, building material and labor, has been awarded to the local project officer who will monitor the classroom implementation, make the payment according to the work progress and assure a detailed follow-up.

The local community participates in providing sand and stones.

Creation of a borehole and water tank

The nearest water source for the village is the Ruvuma River – but its water is not safe. The river is about four kilometers away from the village. Other water sources closer to the village are either not reliable or give salty water.

Availability of domestic water supply at reasonable distance also saves time and villagers will not need to search for unsafe water from the Ruvuma River. The borehole will also serve the Marumba primary school, where a water tank will be constructed in the second program’s phase.

A ground water survey conducted by a professional company has identified potential drilling points in or close to the village.

eu can aid! and TDT financed the preparatory work with 800€. Out of the three identified potential drilling points the most promising one will be identified and then the drilling work can start.

eu can aid! and TDT financed the preparatory work with 800€. Out of the three identified potential drilling points, the most promising one has been identified and then the drilling work has started and will be completed in March 2016, during the dry season in order to find a sustainable water source.

The implementation comprises the water tank connected to iron sheet roves and a water pump for a total cost of 8,600€.

Informing sessions with teachers and pupils on proper uses of water facilities were already held before the survey and will continue.

This project has been financed thanks to the participation of the EC YOGA GROUP.

A testimonial from Marumba

A testimonial from Marumba
This school in Tamil Nadu, India is now ready to enroll children for secondary education! 👏eu can aid! granted € 80… https://t.co/kutI6ok8ZS
Eu can aid! congratulates @DigambarpurA with successful completion of a project 👏 Our grant allowed the NGO to rest… https://t.co/2Rl35YzEV5
Thanks to our support, the NGO MLECI in South Kivu 🇨🇩built 2 mills to help 9 groups of women from the villages of K… https://t.co/4Y185nmdY9
At the end of 2020, we donated around 6K EUR to Ntuntu Orphans and Disabled People, a NGO working with vulnerable g… https://t.co/33FowsO6jm
We have recently received updates on a project we financed in Tamilnadu 🇮🇳to enable mothers of 30 rural girls to se… https://t.co/SmtPqvj5sH
Last year we helped the NGO VAO to build 7 toilets for the elementary school of Abrubruwa village 🇬🇭The project inc… https://t.co/LO2slD7Cvu
Last year we helped the mothers of 30 students in rural Tamilnadu 🇮🇳 to provide for their daughters education via a… https://t.co/TBSey7qubu
At the end of 2021, thanks to our support, the NGO Œuvre Humanitaire pour la Protection et Développement de l’Enfan… https://t.co/kSYnbqAWKA
We wish all our friends and followers the happiest holidays and a great 2022 ✨we are greatful for your support this… https://t.co/HlRUaguLzt
Here the orphanage whose construction we funded during the first year of our 3 years-programme to support the NGO O… https://t.co/gSw6uOoKjE
On the #InternationalDayForEradicationOfPoverty 2021 a group of 11 European organisations  - including EU can aid -… https://t.co/tNM0GFua71
Dans les villages de Kakemenge et Mela🇨🇩 nous avons financé un projet pour aider des familles vulnérables à dévelop… https://t.co/Kc3M91JGjz
In partnership with the municipality of Bapi village🇨🇲 we financed the construction of a well🥤 Now all villagers ha… https://t.co/QeetHovDrM
Thanks to our support, Indian NGO CARD built 6 sanitary latrines and 6 bathrooms for the hostel of a Polytechnic Co… https://t.co/U1BtgnAKDE