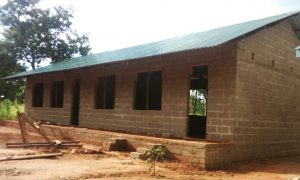 Our partner TDT visited Marumba for one day on 23 January 2017.The purpose of the visit was to see all the projects jointly funded by TDT and eu can aid!, to discuss their benefits with villagers and to listen to their future plans. The visit coincided with a ‘siku kuu’ or special day when more than 300 villagers gathered to celebrate our partnership, to dance and listen to speeches from leaders, including the District Executive Director.

Already in December 2015, during our first visit to Marumba, we could see how primary school needs still are relevant. In accordance with the local TDT representative and the villagers, we decided that the second year of the program would focus not only on new classrooms constructions but also on sanitary facilities implementation.

The new Head teacher at Marumba primary school is Ankum Chalamanda Selemani, appointed in January 2017, an energetic man who will be keen to improve his school with our support.

After year one classroom construction, there remained a severe lack of classroom space. Classrooms are very overcrowded and many children are taught in the open air. What is more, all the toilets are dilapidated and beyond repair. There is no water supply at the school so hand washing is impossible. The nearest water source is 2k away. Collecting rainwater from the school’s roof and the construction of new toilet were of clear evidence and need. 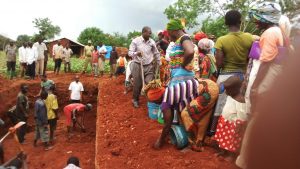 The construction for the two additional classrooms is finished. Villagers have been helping the workers by bringing them water stored in small pits, sand and stones; their labour is their contribution to the project.

The new toilets have been constructed (four for girls and four for boys); the plastic water tanks (each 10,000 litres) are in use and collect properly the rainwater.
eu can aid! and TDT financed this installation with a global cost of 15,000€.

Addition note: in program year one we funded a borehole. This was supposed to be dogged at a certain depth but the technicians found the water at a higher level with the consequence that part of the awarded money was saved. This amount has been used to make a fence around the borehole.

In February 2020 we provided the MAEGA Trust, a NGO working with Dalit communities in the stone quarries of Chennai… https://t.co/o2n6Ic7iLH
We are strongly engaged in supporting recovery projects in help of local communities impacted by the COVID19 pandem… https://t.co/OVCMboiPwX
Together w/a group of parents, the Association Solidarité pour la Vie (Togo) requested and obtained our financial s… https://t.co/jS7wiBPiSH
Last year, we granted 4170 EUR to the Society for Women Education and Economic Thrust (India) to drill&install 4 bo… https://t.co/wZvaBGvovT
In May 2019 KUWA (Karusandara Union of Women Association) received € 6300 from ECA to help set up its members in mu… https://t.co/CWmkc5VVW4
Thanks to our grant, Chati Primary School in Ghana now has a new borehole and a pump! Students have now access to w… https://t.co/eiABLrTLgO
Over the summer, we approved funding for some new projects: we'll finance the Indian NGO SWEET to build 4 new bore… https://t.co/fDzIPp49Hy
A picture from one of the latest projects we supported: 2 women associations in Ecuador (canton Pedro Moncayo) rece… https://t.co/hGjsSphJ5G
At the end of 2019, we supported a group of 125 disadvantaged women by providing the NGO ASEP (Benin) with a manioc… https://t.co/Gzyl082d1H
Compte tenu de la propagation du coronavirus, nos volontaires travaillent uniquement à distance avec accès limité à… https://t.co/I60W0heavh
Given the spread of coronavirus and as a precautionary measure, our volunteers work remotely only w/ limited access… https://t.co/pK30yWTfwp
We supported the organisation Concord Trust to finance the drilling of boreholes and the construction of water tank… https://t.co/jwDMoZAsHP